Which energy drinks are actually overpriced?

I went into a store the other day to buy an energy drink. There were a ton of choices so I started comparing the nutritional information, quantity, and overall price of each one, so I could make the best possible economic choice.

That’s when I realized that there are so many subtle differences between the various brands of energy drinks. I then went down a rabbit hole that culminated in me writing this post.

Here are the questions I wanted to answer: If they have all these ingredients, what exactly does an energy drink do to your body (I wasn’t satisfied with “give you energy”)? Which ingredients are harmful? How much should you drink?

After reading this blog post, you too will know the answer to these questions, and maybe lecture the cashier at the grocery store on why they should develop a system for sorting the drinks.

Caffeine, the primary ingredient in most energy drinks, interacts with your body in multiple ways. You’re probably familiar with it already, as most people enjoy a daily dose in their cup of coffee. But what exactly does caffeine do after it enters your bloodstream??

Caffeine is a stimulant and it primarily increases the activity in your Central Nervous System (CNS.) That’s why you feel ready to tackle the day after a cup of coffee. Caffeine also increases the production of hormones like cortisol and adrenaline in the body.

Cortisol increases your body’s stress tolerance. Adrenaline, on the other hand, prepares your body for exertion by increasing blood pressure and breathing rate.

Caffeine also works by blocking adenosine receptors in your brain. These help your body slow down. They are largely responsible for the tired lag most people feel in the afternoons. These receptors slow down the heart rate, blood pressure, and even muscle action.

Caffeine is the life of the party. It wants to speed things up, and so, it blocks these receptors. This is why you suddenly feel energetic after drinking a can of Monster Energy. Caffeine is also why most people take decaf coffee at night.

How much caffeine is in energy drinks?

The average energy drink has about 32 mg of caffeine per 100 ml. To put that in perspective, an average cup of coffee has 95 mg of caffeine. So a can of Monster Energy (450 ml per can) gives you about 128 mg of caffeine. Brands like Red Bull sell smaller cans (250 ml) so the caffeine dose is only about 80 mg.

Caffeine Informer has an exhaustive database of energy drinks and their caffeine content.

Sugar is a form of carbohydrates, and it’s broken down into glucose that your muscles use to function. When you feel tired, there’s low glucose in your bloodstream. Energy drinks introduce enough glucose to jumpstart your system and get you moving again.

The amount of glucose in a drink is often measured in KiloJoules. Monster Energy delivers 201 KiloJoules (KJ) of energy per 100 ml. Most energy drinks contain between 195 and 250 KJ per 100 ml. The higher the KJ, the more energy you’ll get.

Have you ever noticed that most energy drinks have a similar taste? You have taurine to thank for that. It is an organic compound with a strong acidic taste that pretty much overpowers most other ingredients in the drink.

What’s interesting is that the compound is present in common foods like milk, eggs, and fish. However, these contain a small amount of Taurine (about 50 mg), which is tiny compared to the 1000 mg often included in energy drinks.

Taurine is well tolerated by most people and has been tested as a treatment for congestive heart failure and hepatitis.

Look at the label of any energy drink and you’ll most likely find B vitamins among the list of ingredients. But are the quantities sufficient to do anything? We’ll get into that a little later.

There are generally three types of B vitamins included in energy drinks – Niacin (vitamin B3), Vitamin B6 (Pyridoxine), and Vitamin B12 (Cobalamin)

Niacin is an important part of energy production in the body. It converts carbohydrates into usable energy. It can also open up capillaries and increase blood flow near the skin.

Vitamin B6 is critical to amino acid production and photosynthesis. Basically, it’s impossible to build or repair muscle without Vitamin B6. It also increases the blood’s oxygen-carrying capacity and improves immune system health.

This vitamin is important in the development of new red blood cells and nerve cells.

Here’s something that really bugs me. While most brands claim to have B Vitamins, the quantities are abysmal. For example, Monster energy contains 11 micrograms of Vitamin B12 per can (183% of the daily recommended amount), an impressive amount.

A lesser-known energy drink called fearless, on the other hand, only contains 1.5 micrograms per can. Basically, the ingredient is only there for show.

As we’ve seen, caffeine, sugar, and Taurine are sufficient to give you the kick you’re looking for so it’s not like these other drinks are ineffective. They just use the ingredients to give the appearance of more value.

Ginseng improves stamina, memory, and concentration. Some studies have also linked it to improved immune function and reduced aging. Ginseng is classified as a nootropic (Brain boosting drug) which is why it’s often sold as a stand-alone supplement.

Only a few energy drinks contain Ginseng. One of them, Monster Energy, contains about 82 mg per 100ml, or 369 mg per can.

All energy drinks aren’t made the same

At this point, you’re getting an idea of why energy drinks prices are so variable. One of the biggest reasons is that they don’t all have the same ingredients. Take Ginseng for example. Most drinks don’t contain it, which is why the ones that do plaster it in front of the can’s branding and drive up their prices.

Unfortunately, that doesn’t mean they contain sufficient quantities either.

Even though the evidence is questionable, WebMD suggests you may need up to 3 grams of Ginseng daily for 8 weeks for any appreciable results. So how many cans of Monster Energy is that? I’ll let you do the math.

Many brands rely on marketing to push energy drinks that are basically sugar and caffeine. Other ingredients like B vitamins, Taurine, and Ginseng are present in negligible amounts. Unfortunately, most people don’t notice since caffeine provides a big enough kick.

I love energy drinks because they can give you an extra boost of energy when you need it most. But are you overpaying for basically the same drink with a different label?

Hopefully, you’ve learned enough in this article to answer this question and make the most economically savvy purchase possible. If you need more information on energy drinks and caffeine, visit Caffeine Informer

This site uses Akismet to reduce spam. Learn how your comment data is processed. 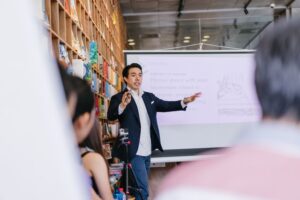 Why is it tougher to land coaching clients in 2022?

How I found clarity through a 10-day meditation challenge

I believe that anyone can become better with the right help.

Looking for a customized Quote?